A political refugee from Myanmar speaks out 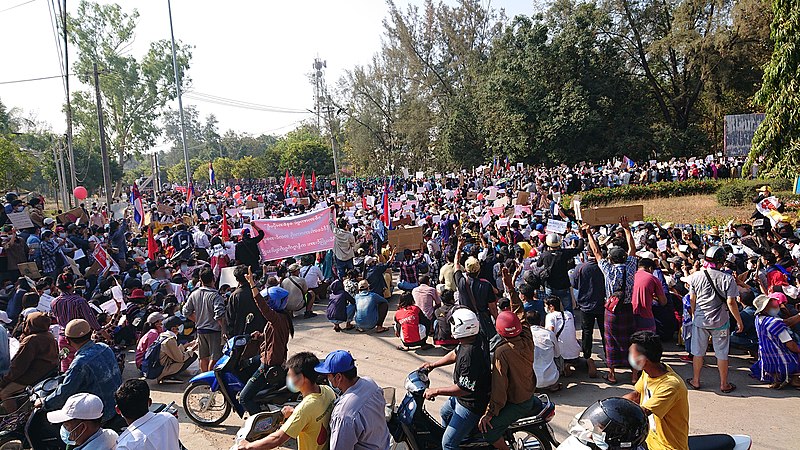 The aftermath of the Myanmar coup

On Oct. 18 the military junta of Myanmar, the southeast Asian country nestled between Thailand, India and Bangladesh, said it would free more than 5,600 people jailed for anti-regime activity, perhaps in response to its military leader, Min Aung Hlaing, being excluded from the ASEAN (Association of Southeast Asian Nations) October summit.

In February of this year, the Myanmar military staged a coup against former leader Aung San Suu Kyi, who was put under house arrest and began jailing thousands who protested against the takeover.

The junta continues to crack down on resistance along the country’s border. Families in Myanmar are fleeing into India as the Tatmadaw, the Myanmar military, targets areas home to armed civilians who call themselves the People’s Defense Force. The New York Times reports that soldiers have fired rocket launchers into residential neighborhoods, burned homes, and cut off supplies. In the eight months since the army seized control, roughly 15,000 people in Myanmar have fled for India.

Thousands Flee Myanmar for India Amid Fears of a Growing Refugee Crisis – The New York Times.

This persecution is nothing new. For more than seven decades, political repression of minorities like the Rohingyas has forced hundreds of thousands of people from Myanmar to seek refuge in other countries. The government has committed consistent and extreme human rights violations in their efforts to crack down on minority groups calling for more autonomy.

Myanmar gained independence in 1948 and since 1962, the government has been under direct or indirect control by the military. Though rich in gemstones, oil and natural gas, and endowed with great solar power potential, the income gap in Myanmar is among the widest in the world, according to its Wikipedia entry.

Over the years, numerous popular uprisings have occurred, invariably repressed. In 1988, thousands were killed by security forces during widespread pro-democracy demonstrations known as the 8888 Uprising. And in 2007, an increase in the price of fuel led to the so-called Saffron Revolution, led by Buddhist monks.

Following the 2020 election and subsequent coup, Suu Kyi was put on trial, charged with voter fraud and corruption.

A political refugee speaks out

I had the opportunity to interview a political refugee from Myanmar who moved to the US this summer. To protect his family, who still live in Myanmar, I’ll call him K.

K is an environmental engineer from the city of Yangon. He specialized in natural resource policy analysis, liaising with international NGOs, ethnic groups in various parts of the country, and government ministries.

Last year when the military began cracking down on those associated with the previous regime, K’s name was placed on an arrest list. He told me how the military had pressured banks working in the capital to reveal the names of their clients, in order to build their arrest list.

Though K had studied abroad, he’d never considered leaving Myanmar for good; now, however, he was forced to begin hiding out in various safe houses.

In the post-coup atmosphere, the military imposed an 8 p.m. curfew. “In the night you would hear their trucks raiding houses,” he says. “I would wake up afraid. The military was torturing, interrogating and killing detainees, and then asking the family to pick up the dead body the next day. At night, there were only the sounds of trucks and screaming.”

Informants were tipping off the military, a common phenomenon under repressive regimes, which created a dangerous situation for K. He decided to leave, though he would have to leave behind his parents, siblings and his dog. With a group of four others fleeing persecution, he travelled clandestinely to an ethnic area bordering Thailand, where they crossed the border by fording a river. He lived in a Thai border town for one month, waiting for travel permission, then arrived in the US on July 4th.

He was exhausted, he said, mentally drained from living in hiding. “I looked forward to walking around freely. I was still traumatized, not used to going out after 8 p.m. and a little nervous about it. But I’m getting better.”

Tragically, K’s father, who ran a construction business in Myanmar, died of Covid-19 two weeks after K arrived in the US.

“I blame the military,” he says. “They shut down the supply of oxygen in hospitals and used it only for military personnel. There was no health support. My father died because of that. The military government doesn’t care about the people. They’re a privileged group.“

Growing up under military rule, hearing only military-approved news, amounted to brainwashing, he says. Once things opened up in the last decade, Myanmar society changed dramatically, including its climate change policy. Climate change had never been a priority for the military; there were too many other issues to deal with, and the military government, K says, never cared about the environment.

Now, younger people went abroad for education, got good jobs, and began interacting with the international community. “People tasted democracy. They changed a lot. The soldiers, however, have not changed. Poor people join the military as one of their only options, they’re often uneducated, and they live closed off in the barracks.”

What might the future hold for Myanmar? Other countries in the region have overthrown strong man governments. The Philippines, for example, kicked out Ferdinand Marcos during its People Power Revolution in the 1980s.

According to Prout, certain factors contribute to the potential for such a transition.

P R Sarkar, propounder of Prout, theorized that every society passes through specific stages dominated by the psychological tendencies of their ruling class, such as worker, warrior, intellectual or capitalist. He points to a consistent cycling through of these classes, with each group holding power until they begin to become corrupt, their rule becomes unsustainable, and eventually the next class rises up and overthrows them. The cycle itself can be transcended only when leaders outside any particular psychological type, holding a broad vision, wide skill set, and strong moral qualities step forward, are recognized by the population and work to implement a benevolent social structure.

In Myanmar, the society has lived under a martial imprint for some time, and this martial class has been enriched at the expense of everyone else, but clearly the evolution of an intellectual class has been occurring. Sarkar writes about counter-revolutions as well, which is what seems to be happening with the recent military coup, with control reverting back to a previously powerful group. This coup can be seen as an effort by the military to reclaim its role, a counter-revolution against opening the country to greater education and prosperity.

However, Prout theory predicts that as society evolves, corrupt leadership groups are eventually overthrown, and new leadership at some point steps forward. If all parts of the society are mobilized and educated to rally against corruption and oppression, they can create a collective, moral force under new leadership. Prout also encourages the development of local regional self-sufficient units within a country to strengthen the economy from the bottom up.

K told me that popular resistance against the military is strong, something the generals didn’t expect. There are numerous local resistance groups, and armed factions in the provinces providing training to resistance forces. These groups have coalesced under the banner of the People’s Defense Force. A shadow National Unity Government is also active.

On Sept. 7, this Unity Government announced war against the military. Since then there have been numerous bombings and protracted fighting. K believes this is not a good solution, as it will cost too many lives. Asked his thoughts on the future of the country, he said, “I’m not so hopeful (in the short term). The military is very stubborn.”

The UN and ASEAN have tried to intervene and international sanctions have been imposed. However, “the international community cannot do much,” K believes. “China and Russia support the (junta). The military say they don’t need many friends.”

The news about the release of detainees after ASEAN’s snub is encouraging, however.

“The Myanmar people are resilient,” says K. “They have the will to fight. They are strong. I’m hopeful that one day things will change.”

I wondered about his perspective on Aung San Suu Kyi. Though initially a respected democracy figure, her refusal to intervene in military persecution of the Muslim Rohingya minority in Myanmar tarnished her reputation internationally.

With Suu Kyi’s election, K believes the government began to hold a genuine interest in the people’s well-being.

The old constitution required that the military would always have 25% representation in Parliament. Suu Kyi was trying to change this biased constitution.

“I used to like Aung San Suu Kyi a lot,” K says. “I respected her sacrifices. I met her a couple of times in person. She encouraged young people. But the Rohingya issue put me off. Her father was one of the founders of the modern Burmese military. This is what earned her much of her support. Because of this, she wanted reconciliation with the military and (thus didn’t criticize their Rohingya policy). She didn’t realize her reputation would suffer as a result.”

K believes Suu Kyi also should’ve known the coup was coming. “Why didn’t she prepare? Those in her circle had good intentions, but their capacity was low. She was not a good leader, as she didn’t delegate responsibility.”

K is now doing what he can to garner support and raise funds for democracy in Myanmar.

The challenges of emigrating include leaving loved ones behind. K has five sisters. After his father’s death, four of them also got Covid. They’re all OK now, and he keeps in touch as much as he can.

His left arm features a newly acquired stylized tattoo, a portrait of his mother and father.

Andy Douglas is a writer, musician and activist who lives in the heartland of the United States. He holds an MFA in Creative Writing from the University of Iowa. His books include “The Curve of the World: Into the Spiritual Heart of Yoga” and “Redemption Songs: A Year in the Life of a Community Prison Choir.” He is currently working on a book about finding balance amidst crisis. He has been a student of Prout since meeting its founder, P. R. Sarkar, in 1984.

PrevThe Invisible Hand Or Inclusive Flow? The Futures Of The World System
The issue of pension provisionNext