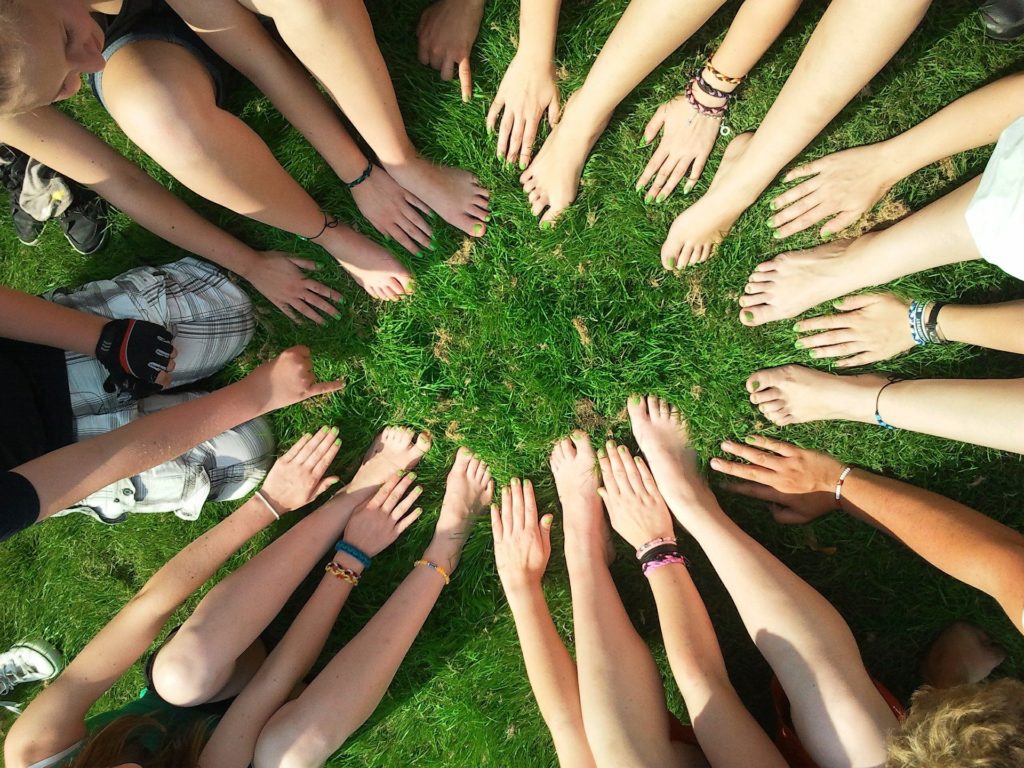 When we approach a complex social problem, whose solutions depend on profound transformations in the way we think and act, it may sound utopian to imagine the world without it. Imagine a world without poverty, without hunger, without exploitation. Maybe we don’t feel able to act on all the fronts we think are necessary to face the problem or to integrate so many dimensions and act in a coordinated way, or sometimes we simply think that this effort is already being made by the world governments or by an important organization, in a planned, effective, and global way, and that the results will come sooner or later. We may even think that the problem is an inseparable part of this reality, and that, for example, there must be poverty for there to be wealth. It is necessary that inequality is perpetuated so that individuals can exercise their freedom, progress through merit and competition. But this kind of thinking is static, leads to inertia, and leaves individuals with their hands tied.

About 1.3 billion people from 101 nations analyzed by the United Nations in the year 2019 are considered “multidimensionally poor.” Regarding extreme poverty, characterized by those living on less than $1.90 per day, the COVID-19 pandemic could lead to an increase of 88 million to 115 million people living in these conditions. The most common feeling when faced with these statistics is powerlessness. We are not part of the round table of global coordinated efforts, we have no political positions, we are left to vote, often with an available list of candidates, which is like a menu with different types of meat for a hungry vegetarian: you have to choose the lesser of the evils or abstain from choosing.

How then to be part of an effective change?

There is one way: in a system in which local solutions are global solutions. Start from the simple, from what each individual is capable of understanding as the best form of economy, of society, of consumption, of exchange, of existence, and expand this system gradually. This would be a process of dis-alienation, in which everyone is a fundamental part of a global change. Thinking locally will then be acting globally.

Prout, the Theory of Progressive Utilization, elaborated by P.R. Sarkar in 1959, brings in its 16 principles, 5 of which are considered fundamentals, a vision that allows us to think equally on how to act locally, and how to expand this action to increasingly broader levels, until a global government, without borders, committed to the welfare of all beings, through a model of decentralized economy. To understand this idea, we can use the concept of syntropy, explained by Ersnt Gotsch, who gave his name to the agriculture he created, with fantastic results when working in harmony with nature. Unlike entropy, in which a system loses energy, and tends towards chaos, in other words, becomes less complex, syntropy acts like nature itself, gaining energy by going through stages so that the system gradually acquires energy, and at sufficient levels to proceed towards more complex systems. It is an effort sustained by several simple processes, which make possible higher and higher levels of organization.

Social progress moves in a similar way, it must be step by step, at the pace of local capacity, in accordance with reality, so that it can be sustained over time and improved by the internal agents of this environment, that is, the local population must be fully engaged in this progress, it is they who must embody it. This involves the progressive use of a series of resources in a rational way, that is, prioritizing the wellbeing of human beings and the balance of the planet. These resources can be of a physical order, such as raw materials, local accessibility, agricultural potential, industrial and manufacturing potential, considering the available resources, or of a local social and cultural order, that is, mental, physical, and psychic levels are interconnected in this system, which will show the ways to change, in a sense of self-sustainability on an increasing scale, of cooperative organization, and of individual and collective progress.  This form of transformation, energetic but coordinated, Prabhat Ranjan Sarkar calls the nuclear revolution.

What can we buy in our locality? How can we foster the local market?  With whom can we unite to extend the reach of these individual attitudes? What production or consumer cooperatives can be created to bring income and better quality products to the local population? What can we do to improve the health and well-being of the locality in which we live? What brings us happiness that we can share? What regenerative agricultural practices can be applied? What kinds of schools can be created in a communal way, which favor the full development of children and adults?

P.R. Sarkar considers all that constitutes the human being and the development of life in all its manifestations, when elaborating his socio-economic theory. In this sense Prout will involve concepts of social organization, economic administration, governance, considering dimensions of ethics, education, and spirituality.

We can approach spirituality within the context of Neo-humanist philosophy, the theory that underlies Prout’s thinking. Neo-humanism provides us with a profound ecological vision, capable of transforming the way we reflect on reality and transform it. It teaches us to understand the interdependence between all beings, the fundamental unity that manifests itself through diversity, the value that is not only utilitarian but also of each being, the capacity, responsibility and potential that human beings have to contribute to the development of life around them, their limitations and boundaries of thought that separate them from other nations, other peoples, other groups, and mainly, to manifest love for all that is alive and assures life. And this is the basis of Prout, to allow all beings to fully develop, to allow happiness and fulfilment. Finally, this commitment is not only individual but of all with the collectivity, so that all can enjoy it.

According to Sohail Inayatullah, a Future Studies researcher, professor at Tamkang University in Taipei, Taiwan, and Prout scholar, we must keep in perspective four dimensions when analyzing a problem. His theory of layered causal analysis classifies these levels into: litany, social causes, discourse or worldviews, and myths or metaphors. “Litany focuses on quantitative trends and problems that are often exaggerated and used for political purposes. At the level of social causes, interpretation is given to quantitative data. The third level concerns the structure and the discourse and worldview that supports and legitimizes it. At the fourth level, the analysis seeks the deep stories, the collective archetypes, the subconscious dimension of the issue under investigation.” (Ivana Milojevi?)

He shows us that there is an interdependence in these four perspectives, and that the fourth level is able to determine the transformation of the other dimensions in a more significant way, that is, if the narrative, the myth, the metaphor, which we can call the worldview we have about the world, changes, the other levels undergo a paradigm shift and improve not only quantitatively, but change the focus of their analysis. The way we see the world, in a deeper, emotional, often unconscious way, may redefine the way we approach a problem. We can consider Neo-humanism as this worldview, and it is what we observe as a background in universalist thinkers, whether atheist or spiritualist. Let’s think about an example.

Social indicators are characteristic of the litheness dimension. Which ones are used today to think about public policies for poor populations? Indexes of extreme and relative poverty, multidimensional, violence, Gross Domestic Product, among others.

A great Brazilian educator, Tião Rocha, founded the Centro Popular de Cultura e Desenvolvimento – CPCD (Popular Center for Culture and Development), a reference in community education and a success story in the construction of alternative forms of education and social action. His basic premise, expressed in the simplest form, is that it takes a community to educate a child, or an adult, or even a city, that is, every local learning potential must be utilized.

But to think about actions and, in a broader sense, social policies of this kind, it is necessary to investigate potentials, not weaknesses, it is necessary to see the glass half full, as he says, and this points to indicators that measure potentials, not problems. Another indicator that has been gaining prominence is the GNH – Gross Domestic Happiness, which evaluates social, environmental, and economic aspects of communities and considers a population to be happy, or not, based on nine pillars. The idea came up in 1972 in Bhutan.

“Unhappy people project nothing new. And although happiness is an individual feeling, it can be produced collectively. But without indicators it is difficult to realize how complex reality is,” he pointed out. “GDP measures everything except what makes life worth living.” – said the representative of Bhutan, Karma Dasho Ura, in a debate at Rio+20

By measuring happiness, you know what brings happiness, and you will act directly on those factors.

You can’t use disability indicators to address problems like poverty, because the potential to address these problems is right there where you see only poverty. The poorest communities have been an example of social resilience, low-cost technology, cooperation, civil organization, creativity, and all without the slightest support from governments. Learning requires an equitable gaze, a true exchange, and a deep honesty about what we don’t know. We cannot solve problems in communities we don’t know, we cannot sustain solutions and technologies in places we will not stay.

It is necessary to start with what we know, to unite those who share the same desire, to significantly improve the conditions of life on this planet, and from there, to live the change we long for, on a daily basis. This fundamental aspect of decentralized development is at the foundation of Prout’s socio-economic theory, and is crucial in the way it makes the practice of social transformation accessible to all.

They are principles that are both universal and adaptable by their very nature: local self-sufficiency as a goal, a way of organizing production and consumption through cooperatives, that is, the union of common interests, and at the individual level, which is the way we are in this world, simply being connected to everything around us, with full involvement with life, with everything that constitutes the basis of our survival and full existence on this earth. And in this sense spirituality, or the full development of our human potentiality, does not start from any escape from reality, but from a deep dive into this humanity, and beyond it, into everything that constitutes life.  No one is unfit to make this plunge, on the contrary, each one is the most apt to transform the reality of his or her locality.

PrevAre we ready for a real reset?
Prout in South Tyrol – Knowledge in ExpansionNext