To Tax the Rich or to Cap Wealth, That is the Question 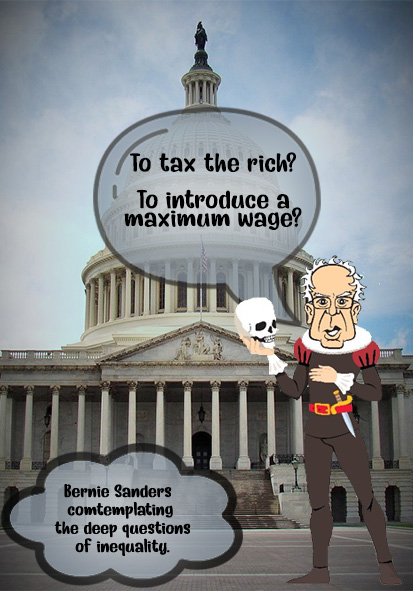 Ever since the days of Margaret Thatcher and Ronald Reagan, the predominant mantra repeated all over the world has been that tax cuts for the rich are the best way to stimulate the economy. But during the past year, this trend has changed. For the first time in decades, progressive voices are calling for increased taxation of the rich. From veteran labour journalist Sam Pizzigati to US politicians Alexandra Ocasio-Cortez to Bernie Sanders, concrete proposals are being put forward to spread the wealth of the rich. In the latest meeting in Davos, a contribution by Dutch historian Rutger Bregman went viral when he suggested that CEOs shelve their “stupid philanthropy schemes” and start talking about taxing the rich. As he so eloquently put it, “all the rest is bullshit.”

The rationale for giving tax cuts to the rich has been “supply-side economics”, popularly termed Reaganomics or Voodoo Economics. By reducing taxes for the manufacturers, it is argued, goods will become less expensive and unemployment will go down.  The economic activity that is generated by this scheme, the theory goes, will be so great that the governmental loss in revenue due to lower rates will be more than compensated for by the broader tax base. This phenomenon has been called the Laffer curve, after American economist Arthur Laffer, who supposedly drew the curve on a napkin to illustrate the argument.  The problem, however, is that there is no proven track record in modern history that tax revenue has increased by lowering taxes. Some economists consider the idea so ludicrous that they have called the concept the Laughter curve.  More worrisome still, there is no indication that lowering taxes for the rich creates jobs or stimulates economic growth. Quite the contrary. The profits to be had in manufacturing or job creation are tiny, whereas the profits from speculation and benefits in the financial sectors, are high. In other words, rich people do not invest their money in building new factories. They either buy stocks, bonds, and derivative financial products recommended by their broker, or they invest their cash in real estate.

None of these activities create more jobs. All they do is creating more inequality.

So, what about Ronald Reagan? Did he not introduce tax cuts and the economy boomed?  Apart from his tax cuts, he also doubled the government debt. In his six years of economic transition, he borrowed more money than all presidents put together since the time of George Washington. That, in fact, is what made the economy boom.

But while the economy during the Reagan days and beyond has been doing well, the people have not. To maintain the same living standard as one breadwinner in the 1970s could provide by working eight to five with weekends free, it now takes two breadwinners working multiple jobs.  At the same time, inequality has skyrocketed. While the richest are much better off than in the 1970s, the remaining 99 percent of the population is decidedly worse off. In addition to that, the total household indebtedness has risen from almost zero in 1950, to over 13 trillion dollars today, with an average debt of people aged between 35 and 54 now over USD 130,000.

During the post-war boom, up to the early sixties, tax rates in the United States were progressive, with the top rate of 91 percent prior to 1962, and then reduced to 70 percent up to 1981. But the trend changed when Ronald Reagan lowered taxes to a top rate of an astonishing 28 percent by the end of his presidency. Not only were income taxes high prior to Ronald Reagan, inheritance taxes had a top rate of 77 percent in the 1960s, while today the maximum rate is 40 percent, and all estates worth less than 11 million are exempt from taxes. You can find similar trends in most Western democracies.

Please bear in mind that these high taxations went hand-in-hand with unprecedented economic growth that was twice the present rate. During some of the 1950s, economic growth topped seven percent, an unheard of figure in the US today.

The big difference between the boom of the 1950s and the 1960s and the one today is not just progressive taxation, but the fact that salaries back then rose in line with labour productivity, and therefore everyone benefitted from the boom. But for the past several decades, real salaries have stagnated, with only the top earners and executives increasing their earnings. Add regressive taxation to the mix, which gives more and more tax breaks for the rich, and the wealth discrepancy picture becomes complete. While it is difficult to prove causation, it is a statistical fact that during times of higher wages and higher taxes for the rich, the economy grows faster than during the present era of low wages, low taxes for the rich and increased inequality.

So what is wrong with inequality? If some people can make money out of their sweat and hard work, should they not be allowed to do that without having to share it with lazy people who do not want to put in the work needed to become rich?

This is an argument we often hear from the far right, but it has a fatal flaw. The truth is that in the present type of market economy, individual gains are rarely, if ever, linked to social contribution. Those who get rich are, as a rule, not those who work hard and build up great companies. Most of the money for the rich is accumulated through speculation, financial services, and corporate raiding. Often people are even rewarded for antisocial activities. For example, when banks were losing lots of money during the financial crisis of 2008, bank executives carted off huge bonuses while loyal bank customers lost their investments and homes. Another example of those who make money out of the misery of the innocent are corporate raiders, those who buy up companies, dispose of their assets, and close the businesses at a profit, while the workers are made redundant. These are obviously the wrong kinds of incentives on which to build a strong economy and society.

The current proposals to increase taxes on the rich by Bernie Sanders, Alexandria Ocasio-Cortez and others is a good step in the right direction. At the same time, the redistribution of wealth through taxes is not the most efficient way to solve the problem of wealth inequality. If the root cause is unfair and results in unequal remuneration of the social contribution of individuals, why not tackle this straight away rather than through the cumbersome system of collecting high taxes from the rich to redistribute money through social services to the poor? If workers were given adequate salaries reflecting their true contribution to the economy, there would be no need to give them handouts through social programs.

So, while introducing progressive taxation seems like a sensible short-term strategy, a more elegant solution would be to introduce a maximum wage along with a higher minimum wage. If the highest paid executive in an organisation was limited to a pay that was set as a multiple of the salary of the lowest paid individual, whether this multiple is 10, 35, 50 or any other number, we would avoid the situation where executives make in a day what an average worker makes in a year.  This would also stimulate the economy, as consumers with more money will spend more and drive the demand for goods. What capitalists often neglect to account for is that their workers are also their customers, and the less they are paid, the less they are able to buy. Though workers have the option to borrow money in the meanwhile, loans eventually need to be repaid, so this is also not the best long-term solution.

A minimum waged that is linked to a maximum wage is a core pillar of the Prout economic system. This basic policy will help solve many of the problems of wealth inequality, social injustice, unemployment and the disintegration of key values in a healthy society. While progressive taxation is good first step to mitigate the worst excesses of inequality, it would even be better to avoid the formation of inequality in the first place.