A lively seminar on the theme of Economic Democracy was organized by Proutist Forum on 7th October at the Nehru Yuva Kendra in New Delhi. 130 participants attended the presentations and discussions which lasted more than four hours.
As a result of the program requests came to arrange similar programs and presentations on Prout in various parts of the country.
A complete video of the proceedings, in both English and Hindi, can be viewed at:

NOTE: The program begins at 13:50 into the recording so please jump ahead to the opening remarks by Rajesh Singh, one the key organizers. 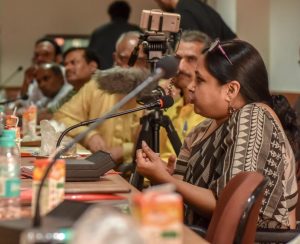 (more details on each of the speakers below)

Dr. Onkar Mittal – MBBS, worked with DFID (Government of U.K), and then in social service for more than 35 years. Has been working extensively for health, wellness, primary medical care and sustainable livelihood most recently in villages in Ludhiana and Moga district of Punjab affected by drug related issues, and in Jharkhand by alcoholism; working to raise awareness of status of women in distress especially widows of Vrindavan,  and various issues with NGOs such as *Bhartiye Jan Parshad Manch and as President of Society for Action in Community Health, Civil Society Network – Delhi , as well as UNICEF, DFID.

Shri Satyaprakash Bharat – National Leader starting from participation in the Baba Amte’s Bharat Jodo Abhiyan Nationwide Cycle March from Kanyakumari to Kashmir. He is strength behind establishment of so many National level People’s movements such as Azadi Bachao Andolan and Yuva Bharat amongst so many others. He is Motivation behind thousands of Youth towards Universal Human Values

Adv. DR Nigam – A practicing lawyer in Delhi High Court & Supreme Court, ‘par excellence’; recognized face of TV debates where he is called for his opinion on complex legal and social issues.

Ms Dipali Sharma – Director, Organizational Effectiveness in Action Aid; 20 years of experience in the social development sector for rights and entitlements for the most poor and the marginalized, women’s empowerment, child rights, land and water campaigns etc. Also supporting youth engagement programs in colleges and universities for  social justice and equality; looking after Corporate Social Responsibility of Action Aid.

PrevProut Norway Marches for the Promotion of Local Fodder in Agriculture
UN Warns of Global Collapse: So How Can We Prevent It?Next