The Bank that Broke Britain by Ian Fraser 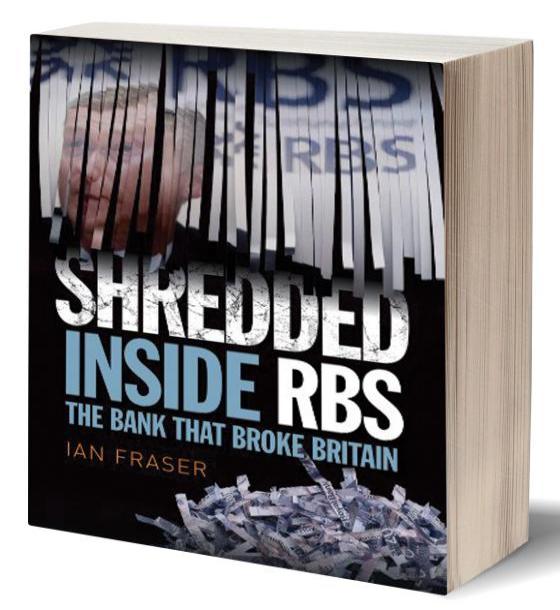 Shredded: Inside RBS, the Bank that Broke Britain, by journalist Ian Fraser, is the story of the rise, collapse and bailout of the Royal Bank of Scotland (RBS), at one time one of the world’s largest banks. While this narrative is the main focus of the book, it is about so much more.

Many books have been written about the financial crisis of 2007, including the collapse of the Lehman Brothers, but they have almost exclusively described the crisis from an American perspective. Shredded takes an inside look at the crisis from the perspective of a British bank, and it is likely the definitive work in this regard.

Fraser’s work is much more than a description of the crimes, corruption, mismanagement and selfishness of the management team in a single bank, as it also illustrates how the mind-set and priorities shown by the RBS bosses is representative of the thinking inside large portions of the financial sector.

Praise for the book has been effusive. Martin Wolf of Financial Times wrote, “A gripping account …RBS was a rogue business, operating in what had become a rogue industry, with the connivance of the government. Read it and weep.” Max Keiser calls it “An instant classic,” and Yves Smith, author of Naked Capitalism, calls it “The definitive account for the RBS fiasco. It’s an engaging tale of how self-serving bank executives systematically broke the rules, lent with astonishing recklessness, abused customers and got suckered by Wall Street – before dumping their mess on the taxpayers.”

In this well-researched book, Fraser describes how the RBS, a bank that exemplifies a whole financial sector, had gone awry. Over the years, RBS was taken over by executives driven by equal portions of personal greed for perks and bonuses and an ego to lead RBS to become the biggest and most profitable bank in the world. In their relentless quest for expansion, the management bought up other banks at overvalued prices heedless of whether the deals made financial sense or not. If the deals went through, they paid themselves huge bonuses, and if they later turned out to be bad deals, the shareholders would pick up the tab.

Billions of pounds were paid out in bonuses every year, and it seems that all activity was geared to maximise these at all cost. Bonuses were paid on unrealised profits, and due to flawed risk assessments, huge profits, with the accompanied bonuses, were booked on transactions that turned out to generate losses. This perverse culture encouraged reckless risk taking and total disregard for the interest of the bank, its customers, or society as a whole.

In general, banks make profits on fees and interest they charge their customers. RBS, however, went even further. The bank actively tried to put some of their customers out of business so that it could grab the underlying assets used as security for their loans. This is probably a new low, even for the notoriously greedy banking sector. RBS is currently fending off a number of lawsuits related to this behaviour.

Even though the actions of the bank were horrendous, the most frightening image the reader is left with is that the malpractices seems to have continued unabated after UK taxpayers bailed out the bank with an astonishing GBP 54 billion, close to 5% of the British GDP. In spite of the UK government now owning over 70% of the bank, the culture of exorbitant bonuses, running into billions of pounds annually, continued, even as the bank was losing money. Other malpractices, such as the rigging of interest rates, continued as well. And customers were still treated shabbily. Even though Derek Carlyle won a Supreme Court judgement against RBS in 2015 for trying to financially destroy him, it took three years before the bank agreed to compensate him. Throughout, the bank continuously refused to take responsibility for its bad behaviour.

This raises an important point. If the taxpayers now are the owners of the bank, one would assume that the culture would change and that a new moral compass would lead the bank’s decision making process. But this never happened.

Presently the UK government is in the process of selling its shares of the bank at a price far lower than what they bought it for. In June 2018 it sold the first chunk of 7.7% of the shares in RBS for GBP 2.5 billion, taking a loss of GBP 2 billion in the process. It is anybody’s guess how big the losses will be once the government has sold all its shares.

Ian Faser does not provide a wider analysis of the financial sector, nor does he ask questions about its role within the broader economy. This is both a strength and a weakness. By sticking to the abuses of RBS and other rogue institutions the book becomes less controversial and will probably reach a larger readership. But given the magnitude of the financial crisis, and the intransigence of present day financial institutions, there are many broader issues that needs to be brought into the light of day.

One of the questions not raised in the book is how and why a person like Fred Goodwin—or “Fred the Shred” as he was nicknamed, due to his cost savings methods–became the CEO of RBS. The short answer: he fit the bill of the financial culture of greed at the time. Mr. Goodwin’s abrasive nature and poor human relationship skills were well known inside the bank. Mr. Goodwin also had a reputation for aggressive cost saving schemes, including cutting 18,000 jobs during the merger between RBS with NatWest, while at the same time pursuing acquisitions and mergers. In short, there was nothing hidden in his agenda, and everyone knew before his appointment what type of a leader he was. Therefore, the problem was not just Fred Goodwin, but rather the new culture of profitmaking gone wild. Thus the shareholders handed over the running of the bank to “Fred the Shred” quite readily.

Another question that is unanswered is the role of banks in a broader sense. Banking is supposed to provide a supporting function so that the real economy can work more efficiently, but the financial sector has now grown so big that it dominates all other sectors of the economy. Instead of serving the real economy, it has now become its master. And a cruel master to boot.

But there is a new twist to this story. While the banks have become parasites living off the real economy, the executives have become parasites living off the banks. There are still honest bankers with integrity around, of course, but too many of them are running a scam, similar to the way “Fred the Shred” was allowed to run RBS. Bankers like him take enormous long term risks showing huge profits in the short term, because no provisions are taken for the eventuality that their gambles will fail. Based on this, they are paid huge bonuses. When the bubble bursts, they resign, get to keep their past bonuses, and to top it off, they retire with an outlandish pension. The shareholders and the taxpayers are left behind to pay the bills.

Human society is a society based on laws. Today we have created laws that allow the financial sector, and in particular the executives who run the banks and other financial institutions, to legally steal from the rest of society. Unless this is recognized, and changed, we will continue to see more, and even worse, financial crises in the near future. And we, the taxpayers, will continue to bail out more people the likes of “Fred the Shred.”