Growing a New Economy by Roar Bjonnes and Caroline Hargreaves 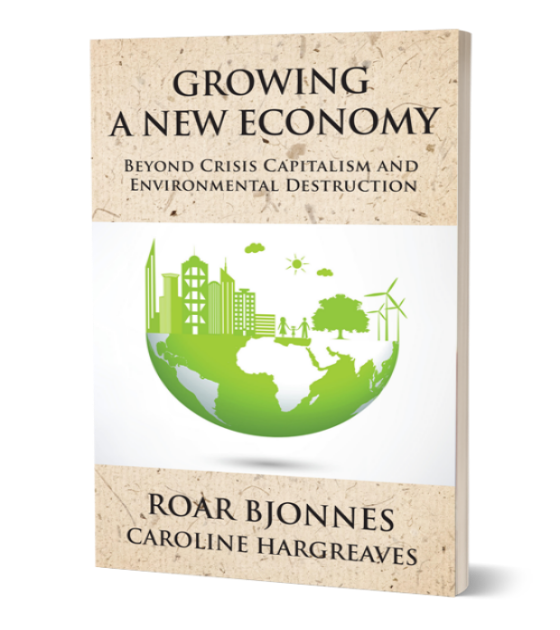 In the new book Growing a New Economy: Beyond Crisis Capitalism and Environmental Destruction authors Roar Bjonnes and Caroline Hargreaves present a compelling case for the current predicament humanity is facing: the environmental crisis, the authors claim, cannot be fixed until we also fix our economic crisis.

Endorsed by world renowned environmentalist Bill McKibben, author of Deep Economy, the book presents comprehensive solutions to the interwoven crises of our times: the debt, inequality, resource and environmental crises. A seemingly daunting task, but the authors pull it off remarkably well. They do so by critically analysing each issue, then by coming up with both short and long term solutions.

As McKibben points out in his own book, the rapid increase in local green businesses and organic farmers markets in the industrial world is a laudable phenomenon, perhaps even a sign that a more sustainable economy is emerging. Likewise, Growing a New Economy is also a hopeful book, but it ploughs much deeper, and it certainly turns over more enriching soil than the standard book on sustainable economics.

Futurist Sohail Inayatullah writes that the book not only “challenges neo-liberal thinking, but also socialist and even green narratives, creating a new discourse for a post-capitalist future.” In addition, it takes a historical look at capitalism itself, and shows, in great detail, how our economy and the market that sustains it, has fundamental flaws. It also goes through our economy’s main problem areas. But it’s not all doom and gloom. According to McKibben, the book is a “hopeful account of the possibilities contained in our current crisis.”

In a layman’s language, the authors analyse the complex history of our market system, the origins of the European Union, with an emphasis on the last economic crisis, and they also take a critical look at the bedrock of modern capitalism and the neoclassical economic theory it is built upon. They also describe the many pitfalls of green capitalism—how and why today’s versions of sustainable economics are not always as green or as deep as they sound.

In the first part of the book the authors, both from Norway, characterizes four distinct planetary problems they predict are now coming together in a perfect storm. The first is the economic crisis of 2007. And if you think this devastating crisis is already over, think again. The superficial efforts to save the world from a complete economic meltdown has simply left the financial system even more vulnerable. The worst is yet to come.

In the next chapter, on the inequality crisis, they draw heavily on the work of French economist Thomas Piketty, who has shown that extreme inequality is not only growing but is also “useless” and “harmful” as well as a fundamental threat to our democratic institutions.

“All human beings deserve to have a decent living standard,” they write, “but when resources are poorly allocated, the few take an ever-increasing share of the world’s wealth.” While there has been progress in bringing millions of people out of poverty, inequality in rich countries, and in the world as a whole, is increasing at an unprecedented rate, and if not checked, it could destabilise the entire free market. After all, in order to have a functioning free market, the book argues, the people on Main Street and in the world’s villages need enough purchasing capacity to buy what is essential to lead a good life.

The resource crisis is the third crisis described in the book. The authors paint a vivid picture of how non-renewable resources are being destroyed at an alarming rate because “they have been taken for granted, or if scarce, it has been assumed the market will find a ready alternative to replace them.” But as we know, that is generally not the case. Indeed, we have, according to many scientists, reached a state of “overshoot” and if we do not alter course, the global eco-system, which our economy is an integral subsection of, is predicted to collapse somewhere in the middle of this century. In other words, we are facing an environmental crisis of unprecedented proportions: we are in fact in the process of destroying the capacity of nature to support life itself.

In the section on the environmental crisis, the book describes six of the most serious threats facing our planet today. With clear and logical facts, it lays out the bare bones reality we are up against. If we do not face these problems head on and safeguard a sustainable environment, there will simply be no sustainable economy. Therefore, it is time to change course so that we can start “creating a more sustainable, ecological and resilient economy.”

The second part of the book deals with the history of economic thought. Here we are introduced to the main economic thinkers throughout history, from Adam Smith to Karl Marx, from John Maynard Keynes to Joseph Stieglitz, from Karl Polanyi to E. F Schumacher. Here they paint a fascinating story of how the various economic ideas have clashed over time and how classical economists like Adam Smith, the very father of modern economics, would probably turn in his grave if he knew how far away capitalism has evolved from his own ideas.

This part of the book also looks at how the European Union was created, and analyses the “Four Freedoms” that lays the foundation of the EU’s constitution as well as its troubled economic and political system. A situation which the authors think is predictable and can only be solved if the entire union is reorganized along a con-federate system of more localized political and economic regions.

The third part critiques the very foundation of the capitalist system, namely free markets and neoclassical economic theory. This part, which may be a bit heavy on theory for some will nevertheless be highly rewarding for those who’ll take the time to go through its detailed analysis of the flawed “mathematics” and “science” of modern economics.

It is in the fourth part of the book, “Economic Solutions for People and Planet,” however, where the authors “put on their visionary glasses to look into the future of economics.” And what a future it is. In the section on resolving the financial crisis, they first ask the question many of us have pondered and been frustrated about: why should the people on Main Street be responsible for the crisis created by those on Wall Street? But they do not stop by asking questions, they proceed by introducing alternative solutions, including progressive wealth and income taxes, steps to reduce monopoly profits, and creative ways to overhaul the banking system.

But that’s not all. They also give suggestions on how to overhaul the financial sector, which has “grown out of proportion to the real economy” and thus changed from a “necessary tool to a destructive weapon.” These changes include the banning of naked short selling to preventing foreign exchange purchases for speculation. And then from there they tackle new reforms in free trade, patents and capital movements. In simple and clear terms, the authors create the case for how to reduce speculation and how instead to stimulate the real economy.

The important process of making poor countries rich and prosperous is also discussed. Here we learn that many of the policies that are now imposed on poorer countries are exactly opposite to those that rich countries used to become rich themselves. In addition, economic inequality within nations is also addressed, with a far reaching proposal to introduce a deeper economic system they term “economic democracy.”

In the final part of the book, we learn that the previous policies are transitional, and that more permanent economic policies are needed to create a new economic system. It is here that we are introduced to an entirely new economic theory, the Progressive Utilization Theory (PROUT), which incorporate both capitalist and socialist ideas while going beyond both these traditional systems of economics.

According to PROUT economics, capitalism functions best on a small scale and becomes dangerous once corporatized and monopolized. These corporations must therefore gradually be turned into worker-owned coops. In place of the old market system controlled by corporate giants, a new, regulated market economy will be guided by a benevolent government structure that will lay the rules for integrating society, the economy and the environment in a new system that transcends the old left-right political spectrum of ideas.

Growing a New Economy is a landmark book. Thought provoking, rich in content, deep-ploughing in its analysis, while at the same time presenting new and remarkably sound alternative solutions to our current crisis in economics.

PrevGlobal Reality Check: How Is Our Planet Actually Doing?
The Bank that Broke Britain by Ian FraserNext