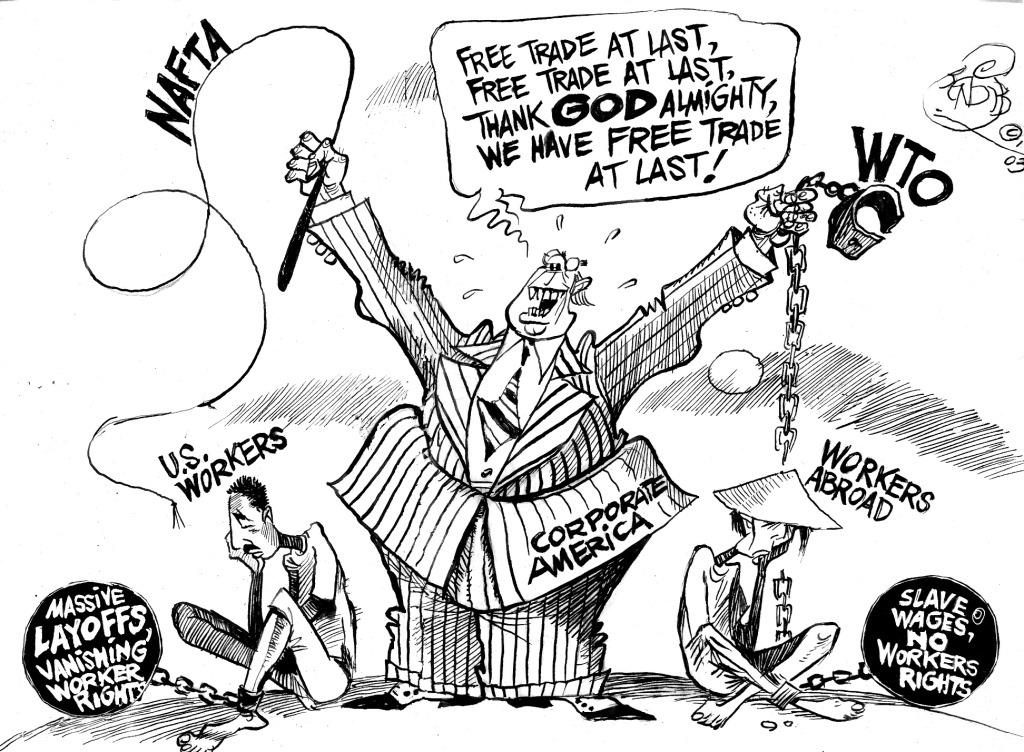 This narrative suggests how Proutist Trade can be explained in today’s world by comparing and contrasting it with Free Trade and Protectionism. The article describes (1) how global free trade has succeeded and failed during the past seventy years; (2) how the Trump Administration is undermining free trade though protectionism based on nationalist populism; and (3) how PROUT’s vision of trade includes characteristics of both free trade and protectionism, yet transcends them through its emphasis on economic decentralization, localism and democratic decision-making.

In 1817, the British economist David Ricardo proposed that if two different countries producing different types of commodities were to engage in reciprocal trade, each country would increase its overall consumption. He argued that as each nation produces something cheaply for export to another nation, each of them will export a good for which it has the comparative advantage and import another good which it has less capacity to produce or produces at a higher cost. Thus, when nations sell goods and services to one another using this strategy, free trade is mutually beneficial to all parties.

Several decades after Ricardo’s proposal, the idea of reciprocal trade was applied on an international scale. The earliest bilateral deal of this kind was the Cobden-Chevalier treaty, signed on Jan. 23, 1860 between England and France. Because it generated a higher volume and less costly form of trade, the arrangement was widely imitated during the next seventy years as other nations across the world negotiated hundreds of similar agreements. Through these reciprocal exchanges, two countries would reduce or eliminate import barriers with each other, and in many cases, grant its partner ‘most favored nation’ status. This bilateral practice generated great wealth and prosperity for a growing segment of the world’s population until the 1930s and 40s when the Great Depression and World War II exposed a significant weakness in the free trade convention. Since nations produce mostly for export rather than their own domestic markets, reciprocal trade agreements were entirely vulnerable to the calamitous effects of global depressions and foreign wars.

Some politicians believed that these impairments could be addressed through a global agreement or safety net for ensuring reciprocal trade. In 1948, the United States and other countries institutionalized free trade practices at the international level through a rules-based trading system. The General Agreement on Tariffs and Trade (GATT), history’s first multilateral treaty for trade, guided the first half of the postwar period and generated phenomenal economic growth across the free world. But during the 1980s and 90s, as globalization expanded and societies became more and more integrated, the GATT needed upgrading. In 1995, it was replaced by the World Trade Organization (WTO), which now involves over 95% of the commercial trade in 164 nations. The WTO has been praised for its capacity to

But there are vast problems with the treaty-based global trading system. Everywhere it operates, the monolithic WTO has undermined national legislative authority, independence and sovereignty. Through its influence over national governments, multinational corporations have built up unregulated political power, which they exercise through unequal trade agreements and open financial markets. For these reasons, the negotiating leverage of richer nations has overpowered the interests of poorer nations.

In addition, the WTO allows corporate profits to be maximized at the expense of work safety and environmental protections. Workers’ wages and labor conditions have also stagnated significantly in most nations under the WTO. Except for the period of the Internet rollout from 1995-2000 when market valuations were euphorically overpriced, the WTO has failed to generate economic growth and higher-paying jobs in many regions of the world.

Since 2001, the WTO’s Doha Round of Trade Negotiations has stalled due to policy differences between advanced and emerging economies, mainly over agriculture. For this reason, progressive innovations in global trade have been at a stalemate for nearly two decades. Once celebrated for creating order and stability, the WTO is producing disorder and unrest by sending jobs abroad and hollowing-out vibrant local economies. It’s widely recognized that the WTO has eroded the democratic fabric of the international community.

Citizens have no voice in determining the trade policies which directly affect their lives and livelihoods, creating a deep political void across the world.

American President Donald Trump has exploited the rising unpopularity of multilateral trade. Through his aggressive transactional approach to commercial trading, Trump has rejected the rules-based international order in favor of bilateral ‘deals’ between individual nations. He justifies these policies by accusing other nations of stealing America’s intellectual property, engaging in unfair industrial policy and sponging unfairly off the United States for their military protection. Yet Trump seems to have no strategic goal other than creating political disruption for his own personal interests.

Besides threatening to pull the United States out of the WTO and the transatlantic trade agreement with Europe, Trump has refused to join the Trans Pacific Partnership. By imposing real tariffs and raising further threats of tariffs, thereby challenging the predictability of global trade, Trump hopes to gain concessions from US trading partners through chaos and confusion.

His bombast on trade barriers has created deep uncertainty among US friends and foes alike, sending shock waves throughout the WTO member states.

When producers cannot predict the future costs of materials, they have difficulty both in pricing their products and in knowing if their customers will turn to outside suppliers who offer similar products more competitively.

Trump has thus undermined the postwar global system where it is most vulnerable — by exploiting the fact that the WTO operates as a de facto federation without a genuine democratic mandate. The globalist worldview  — Liberal Free — has produced wealth for a broad sector of traders and investors by liberalizing trade, deregulating financial flows and boosting privatization. But the anti-globalization opposition which developed among the political Left from the 1980s – 2000s has been outflanked by a new movement of insurgent populists who want to roll back globalization and the liberal policy of open borders. Their reactionary ideology of protectionism and nationalist entrenchment, which gathered steam since the Great Recession of 2008, has now spread across the US, Europe and elsewhere.

This political and cultural campaign is organized behind the libertine front of mercantilism, which asks: what good are soft borders when they allow jobs to flow out of our nation and entice immigrants to move in?

Rather than reduce the social inequality that Free Trade has created, this raging protectionist movement has made conditions worse. In the long-term, support for these extremist policies is impractical because their economic benefits extend to only a tiny oligarchy of elite traders who manage bilateral trade. The grassroots opposition to open markets and the protectionist claims for market rejuvenation have no roots in economic localism. Yet this factious crusade will continue to suppress local jobs, infrastructure and basic amenities through its zealotry, racism and xenophobia for it expresses a naive, yet not unwarranted, resentment against unequal globalized trade.

How Prout Includes Elements of Free Trade and Protectionism
Although the rejection of the international trading regime has come as a shock to many, it’s not entirely surprising. The demise of the postwar regime does not mean there is no need for a global system. What it does mean is that we have suffered a flawed global system for the past seventy years — one which attempted to create a centralized bureaucracy for trade, finance and monetary policy. It’s quite clear that a new international system must emerge.

But why is this rules-based international order, so enthusiastically created and supported by the United States after World War II, now under attack by the US itself? A prime reason is that America’s moral vision of democratic capitalism — which once rallied the free world to defeat Nazi fascism and Russian communism — has been shattered by the meteoric ascent of China and its instrumentalist brand of autocratic capitalism. In losing their principled confidence in democracy, America and its institutions for liberal internationalism are rapidly losing their reason for being. And if bilateral trade agreements and crushing tariffs become the new norm among nations, the global monetary system will very likely collapse along with the WTO.
What is PROUT’s solution to all this? First, it’s important to recognize that PROUT embraces some elements of Free Trade. For one thing, Proutist free trade would not involve duties on imports or exports because national currencies will be replaced with barter, leaving no financial losses for trading partners in an exchange. This is particularly important when one locality or region overproduces goods that are of benefit to another area which underproduces the same types of goods. Essentially, the goal is to shield community development before engaging in outside exchange. Then, as people’s needs are met through local production and self-governance, free trade is encouraged among trading regions to increase prosperity, equality and cooperation. Thus, Proutist free trade would not be an open door for speculation and profit-taking, but an opportunity for unequal regions to trade their surpluses with the objective of becoming more equal and cooperative.

This is also why PROUT embraces some elements of Protectionism. When local minimum necessities cannot be met and local industries cannot be developed within a community or region, local demand and consumption must be protected against external producers, speculators and investors. This is especially true with regard to the production and consumption of agriculture, raw materials and heavy industry. Only after the basic needs of local people are ensured would a local surplus be exported. Protection is therefore justified in building up local economies and guarding against exploitation from commercial forces which operate outside the region.

Protectionist forms of trade are conducted through barter-driven cooperatives rather than profit-driven markets. Again, capital surpluses and speculation are discouraged and outside investment is divested to benefit the community.

PROUT thus shares characteristics with both Free Trade and Protectionism. But it should also be recognized that these two ideologies are based on centralized markets and hierarchical decision-making. Both destroy the vibrancy of local economies. Free Trade creates monopolies which devastate communities by siphoning off their money, while modern Protectionism is largely a rhetorical embrace of grassroots localism without substantial economic plans for addressing community self-reliance and sustainability.

PROUT proposes a different kind of globalism which is based on local and regional sovereignty, rather than national and global sovereignty. Unlike the centralized policies of Free Trade or Protectionism, PROUT is grounded in:

Prout attempts to develop local production and jobs for local people to meet their needs. For this to work, each region must secure basic goods and services so that all of its citizens are self-sufficient. Commodities that are not produced locally would not be imported or exchanged on the local market, allowing the local economy to focus on the production of the peoples’ minimum necessities. These basic needs, which are largely dismissed by Free Traders and Protectionists as having little market value, include food, water, clothing, housing, education and healthcare.

After the requirements of local people are met, locally-produced goods may be exported to other regions which lack the potential to produce them. This trade would occur through a secondary, external market, leaving the nation’s internal market to focus on its own sufficiency. Thus, self-sustenance at home and abroad are the goal of Proutist trade. For this reason, PROUT rejects both the speculative profits of the marketplace and the tariffs and quotas created by governments. Cooperatives and social inclusivity must preclude capital markets and social exploitation by embracing cooperative advantage over competitive advantage and keeping economic power in the hands of the people. This is how Proutist trade transcends Free Trade and Protectionism.

PrevThe Next Economy (Part I): Understanding the Problem
Wait No More! Global Warming is hereNext