On Catalonia and Samaj Movements 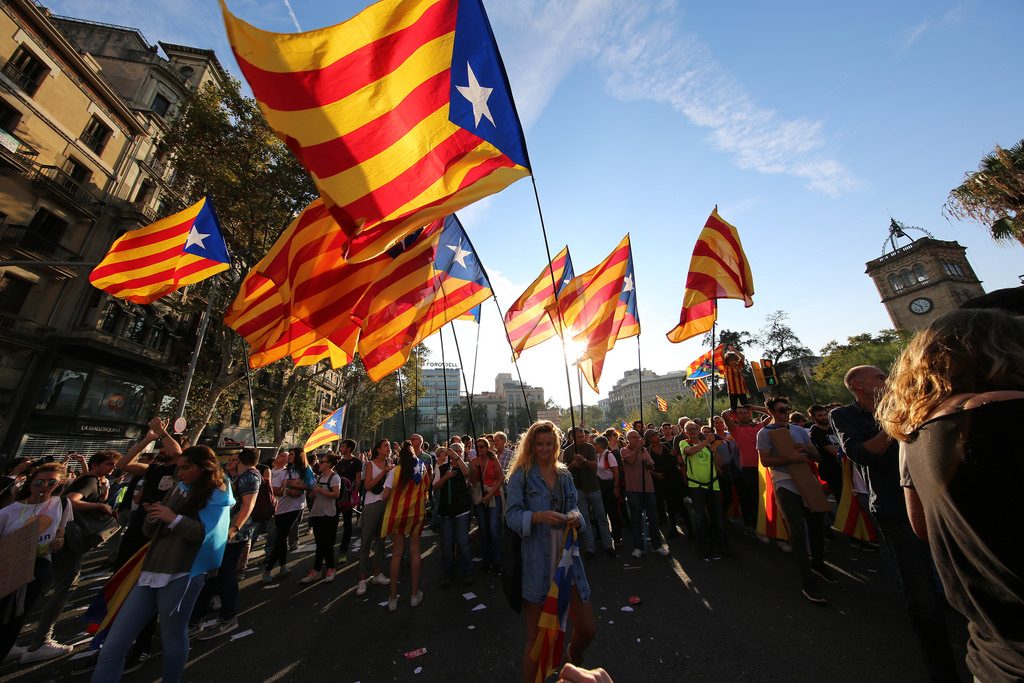 At the time of this writing, the former president of Catalonia, Carles Puigdemont, has been stripped of his powers and is facing sedition charges, while the government in Madrid has imposed direct rule on the previously autonomous region. The issue at stake was a unilateral declaration of independence by Catalnoia on 27 October 2017, following a referendum on independence that was held in this prosperous region of Spain.

The referendum was bitterly opposed by the Spanish government. Under conditions of strong suppression by Spanish police the referendum was held on 1 October 2017. With 43 percent of the population voting, the result was that 90 percent was in favor of independence. After vain attempts to initiate negotiations with a hard line Spanish government, Catalonia declared independence.

It has been argued that all those in favor of remaining part of Spain boycotted the elections, and that the outcome is not a fair representation of the will of the majority of Catalonians. The strong pro-unity demonstrations that took place in the days following the referendum is an indication that there could be much truth to that argument.

But what is Catalonia, this obscure region of Spain, which few outside the country could have placed on a map prior to this crisis? And why are the Catalan people looking for independence from Spain? Would Catalonia qualify as a Samaj, and if so, should Proutists support the bid for independence?

Catalonia is a region in the North East of Spain which includes the city of Barcelona. It makes up 6.3% of the Spanish landmass, and contains 16 percent of the population.

Its economic importance to Spain is higher than what the following economic figures would suggest. The GDP of the region represents 1/5th of Spain’s GDP, but it contributes 25.6 percent of Spanish exports and 30 percent of all new investments goes to Catalonia. Its GDP per capita of EUR 28,590, even if not the highest of Spanish regions, is still much higher than the GDP per capita for Spain as a whole.

The area around Barcelona, which today makes up Catalonia, was unified in 1070 by Ramon Berenguer I, Count of Barcelona, who subdued other Catalan Counts and brought peace to the region. This sowed the seeds for a Catalan cultural identity.

The terms Catalan and Catalonia emerged first around 1150, and over the next 300 years, the prosperity and influence of Catalonia grew steadily. A distinct language and culture emerged, which is alive and well until today. From around 1450, the political freedom Catalonia had gained gradually faded, and it finally ended up ceding its independence to Spain.

Dreams of an independent Catalonia never disappeared completely, and when Spain’s power weakened after losing the American-Spanish War, fresh demands for Catalonian independence emerged which finally led to an autonomous status with Spain in 1931. With the emergence of General Francisco Franco as victor in the Spanish Civil War, he abolished the autonomous status in 1938. After Franco’s death in 1975, Catalan regained its independent status within Spain.

Dreams of full independence never died, and from 2006 there has been a movement that has demanded total independence for Catalonia, and several referendums to legitimise a declaration of independence were held leading up to the events in October 2017.

Is Catalonia a Samaj?

Catalonia has a common language, a sentimental legacy, a common culture, and the potential for creating a self-sufficient economic zone. It is economically prosperous, but even without an anti-exploitation sentiment, all conditions for a genuine samaj movement are present.

This issue is potentially a contentious one. Should a people of a specific region, if the majority so desire, have the automatic right to independence? Should West Bengal, for example, have the right to become an independent state? P.R. Sarkar did not specifically discuss this issue as far as I am aware, but he gave some hints that can serve as a clue. He was clearly against the partitioning of India into India and Pakistan, and blamed many subsequent problems on this partitioning. He also discussed Samaj movements as socio-economic zones within the context of countries, and there is no indication that he proposed that they should become independent states. P.R. Sarkar also said, “This age is not the age of big animals and small countries.

From this, it is doubtful that Sarkar would support the idea of Catalonian independence, and I see really no strong argument that any Proutist would argue for such a stance. But be that as it may. It is clear that Catalonia would qualify as a Samaj, and as long as Catalonia would remain within the European Union, even independence from Spain would not allow it to achieve that goal unless radical changes are made to the EU constitution.

That said, in other areas of Europe or the globe, there may be instances where a certain samaj would stretch across national boundaries, as in the case of the Sami people, whose ancient homelands spread across Norway, Sweden, Finland and parts of Russia. In a large, integrated system comprising various samajas, such autonomous regions supporting the cultural, geographic, religious and linguistic legacy of a people can emerge as part of a larger economy and across national boundaries.

Catalonia and the European Union

The basis of the European Union are the so-called Four Freedoms, that is, freedom of movement of people, goods, services and capital. In such a system, the basic prerequisites for creating self-sufficient economic zones or samajas are simply absent. Neither sovereign states nor regions within these states can have an independent economic policy, as the rules of EU precludes any meaningful samaj to be formed! If there is free movement of people, how can you give priority to local people for employment? Actually, the laws of EU specifically forbids you to give priority to local people.

If there is free movement of capital, how can you prevent profits to be taken out of a region? Any such restriction, which is one of the basic tenets of a samaj, is currently not possible in the EU.

If there is free movement of goods, how can you promote indigenous industries to ensure that any goods that can be produced locally indeed are produced locally, instead of being imported from other parts of EU?

The same principle goes for services. As we can see, in the present European Union, the laws are such that samajas cannot function the way they are supposed to. So-called sovereign states are not sovereign at all, as they are bound by the free market principles imposed by the EU.

Thus, one of the first demands samaj movements inside the EU must make, is to push for changes to the framework that makes up the EU constitution.

The rise in nationalist and independence movements in Europe is a clear indication of the failed policies of the European Union. Trade is good, and free trade is even better, but it has to be between equal economic partners. Therefore, to be truly beneficial, European trade agreements have to include possibilities for less developed countries and regions to improve their competiveness and welfare for the people, rather than to benefit those already ahead and preventing less developed regions from advancing.

Unlike many other regions of the EU, Catalonia is a relatively prosperous area, and that is also one of the reasons the Spanish government is taking such a hard line approach. But if both the Spanish government and the EU had been more accommodating to the Catalan demands, a workable compromise may have been possible. The sentimental legacy of people cannot be suppressed, and if both national governments and the EU continue to ignore these issues, this conflict is the beginning of more to come.

Rather than seek independence from Spain, the Catalans, and all other samaj areas within the EU, should seek independence from the current anti-regional policies of the EU and organise its region along the principles of decentralization, self-sufficiency and economic democracy. The enemy of true regional independence is not nationalism but neo-liberal capitalism as exemplified by the four freedoms set forth in the EU constitution.

PrevNorth Korea – Nuclear War and Self Sufficient Economies
Ethnic Cleansing in Myanmar: Stand Up for the Plight of the RohingyaNext