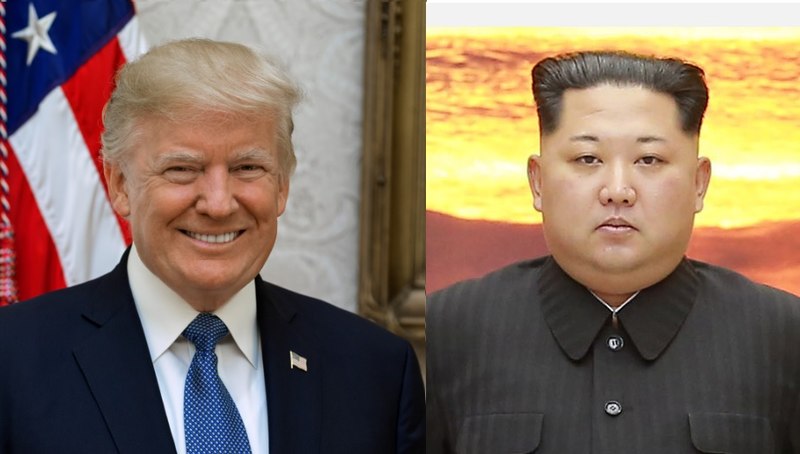 The escalating rhetoric between North Korea and the United States has brought the world closer to Nuclear War, something that has not been contemplated since the Cold War.

Some news commentators insist that the North Korean Supreme Leader, Kim Jong-un, is a mad and crazy person. That is unlikely. There is every indication that he, like his father and grandfather before him, is a shrewd and calculating leader.

In North Korea, the Supreme Leader has an almost godlike stature, as well as near absolute, political control. But despite being the Supreme Leader of North Korea, Kim Jong-un’s grasp of power, unlike that of his father, is not secure. It is therefore necessary for him to act strong and powerful to stay in power. Threatening the United States, the most powerful nation on earth, makes him look powerful and invincible. It also redirects attention away from his domestic problems, such as food shortages, etc.

Therefore, the escalating threats against the United States are more for domestic consumption than actual threats, and it is unlikely that Kim Jong-un believes he can win a nuclear war. However, it is a game of brinkmanship, and during such games things can go wrong.

The nuclear program itself is not illogical from a North Korean point of view. A country with nuclear weapons capabilities is much less likely to be attacked than a country without it. Libya, Iraq and Ukraine were all countries with nuclear programs which were abandoned, and they were all invaded. North Korea believes, probably rightly, that it is less likely to be invaded if it has a nuclear deterrent.

Apart from creating an external enemy to bolster his popularity at home, Kim Jong-un has also taken internal steps to eliminate threats to his regime. It has been reported that China was actively pursuing a plan to oust Kim Jong-un, whom China regards as out of control and a threat to their national interests. China was therefore grooming Kim Jong-un’s estranged half-brother, Kim Jong-nam, to become the new leader.

Kim Jong-un discovered the plot, according to the reports, and had his half-brother assassinated in the Kuala Lumpur International Airport in Malaysia. He also had his own uncle executed, as he was suspected to be involved in the same plot. This indicates that China may not have had as much influence on North Korea as the American government might think. A collapsed North Korea is not in the security interests of China, with the prospect of millions of refugees entering the country and the possibility that the US would station troupes near its border. China needs North Korea as a buffer, but China is probably almost as concerned about North Korea’s nuclear ambitions as South Korea.

“The Poorest Advanced Economy in the World”

Dr. Mitsuhiro Mimura, a leading expert on North Korea, calls North Korea “the poorest advanced economy in the world.” While the country is poor, he explains, the Koreans “have built a comprehensive production structure including both labor-intensive and capital-intensive industries. They are able not only to produce capital goods to run their society, such as railroad locomotives and carriages, cargo vessels, turbines and generators for power plants, numerically controlled lathes, but they also make most of the things needed for military use, from small arms to ballistic missiles and nuclear weapons, trucks, jeeps, destroyers, and diesel engines.”

What is striking about the North Korean economy is that it has many elements that resembles Prout. The guiding philosophy of North Korea, the Juche Idea, calls for economic self-sufficiency. Anything that can be produced locally is produced inside North Korea, using locally available raw materials whenever possible. Advanced production methods are encouraged, and the stated goals are self-reliance, modernisation and scientific development.

In essence, North Korea is self-sufficient in most things, including energy, food and capital goods. While it is still a centrally planned economy, a decentralisation of production decisions has been taking place over the years, and presently there is a system where heavy industries are controlled by the central government, while light industries are increasingly under the control of local authorities. While private companies are banned, “socialist cooperation,” which works more or less like cooperatives, are encouraged, and there is an important role in the economy for individual, small scale enterprises such as artisans and household farmers. This economic system has an uncanny similarity to Prout’s three tier economy. But there is more.

In theory, North Korea guarantees the minimum necessities of all people through a food distribution system. This system collapsed during the famine in the 1990’s, as the government was unable to provide even a fraction of the food requirements for its people. In 1997, people were allocated only 40 grams of grain per day, which is far below starvation levels. These days, the guaranteed food rations have been restored to something close to the caloric minimum requirements.

The direction of the economy is also not for profit. The main goal of a factory manager is to ensure the survival and welfare of his workers, and as long as he manages that, he can get away with breaking laws and formal regulations.

Problems within the North Korean Economy

With these and other ‘Proutistic’ policies in place, one would assume that North Korea is prosperous. But it is not. After this economic development started in the 1950’s, the GDP per capita or North Korea is still only 1/7th of that of South Korea, which has pursued an unashamedly capitalistic way of development. There are sporadic food shortages and the electric consumption per capita is 17 times below South Korea. Access to telecommunications and the Internet is severely restricted. Any independent thinking is effectively cracked down upon; and the general population is not only poor but deprived access to modern technologies, such as the Internet and mobile phones. The North Korean experiment, in other words, has not worked out that well for its people.

There are several reasons for this, and the foremost is the country’s isolation. North Korea has taken the concept of self-reliance to an extreme, not unlike Rhodesia during the economic sanctions imposed toward that racist regime. North Korea has chosen the path of isolation, and that has dramatically cut down the productive potential of the country. If this is due to fear of the introduction of foreign ideas into the country, which may upset the monolithic system of government and its Supreme Leader, or for ideological reasons, the effect is the same. In recent years, economic sanctions have isolated the country even further. North Korea has effectively been cut off from the rest of the world.

There are also other reasons for the economic problems, such as the strong centralization of economic planning and the lack of incentives for people.

Human society progresses through increased cooperation between its members, and this require an ever increasing level of specialization between individuals. The more people specialize in their respective fields and cooperate with others, the more prosperous and productive they will be. This complex cooperation is what makes human society unique, and today’s complex global cooperation has made the world much more productive than any other time in history. International cooperation is not the problem. The problems are that in a capitalist system the distribution of the fruits of this international cooperation overwhelmingly benefits a small minority and the system depletes our natural resources and destroys the entire eco system in the process.

Prout has the answers to this dilemma, as it envisions a coordinated cooperation that prevents exploitation of some areas and some people for the benefit of the few. But Prout does not advocate a decrease in international cooperation, as this would be tantamount to reducing the productive potential of the world. Even though P.R. Sarkar talks about self-sufficient economic units, this is NOT a call for isolation and an end of trade. Contrary to the general belief amongst Proutists, Sarkar, if certain criteria are met, encourages total free trade without any duties.

“In the existing world structure geo-sentiment is an obstacle to the implementation of free trade.    Neither the capitalist countries nor the communist countries like the free trade system because it is detrimental to their respective self-interests. But there are some free trade zones in the world which are very bright examples of the success of this sort of system. Singapore is one such example. There was a good proposal to declare Calcutta a free trade zone, but it was not implemented for many reasons, including the failure of the concerned leaders. Bengal could have been greatly benefited by such a system”.     [Economic Dynamics, 13 September 1987, Calcutta]
The big caveat here is that the free trade has to be done between equal parties, and that countries with an underdeveloped economy must first build up their industrial potential before opening up their borders. If not, they will end up being exporters of raw materials and importers of manufactured goods, something Sarkar strongly speaks against. But Sarkar never encouraged economic isolation. (For a detailed discussion on the balance between self-sufficiency, protectionism and free trade, please refer to Ramesh’s book “Growing a New Economy.”)

North Korea presents an important lesson for Proutists: to avoid the temptation to take Prout policies out of context and to apply them superficially or blindly. P.R. Sarkar’ theory is far too comprehensive and refined to limit itself to simplistic interpretations. Moreover, in the end, the prosperity of the general masses is a country’s true measure of economic success.

While the immediate threat of nuclear war with North Korea is probably exaggerated, the long term prospects are worrisome. On the one hand we have widespread exploitation, injustices and social problems that lead to conflict, and on the other hand we have leaders of nuclear capable nations that are more interested in power and wealth than the welfare of their people. This is a volatile mix, and as long as this situation continues, the threat of an “accidental” nuclear war will remain.