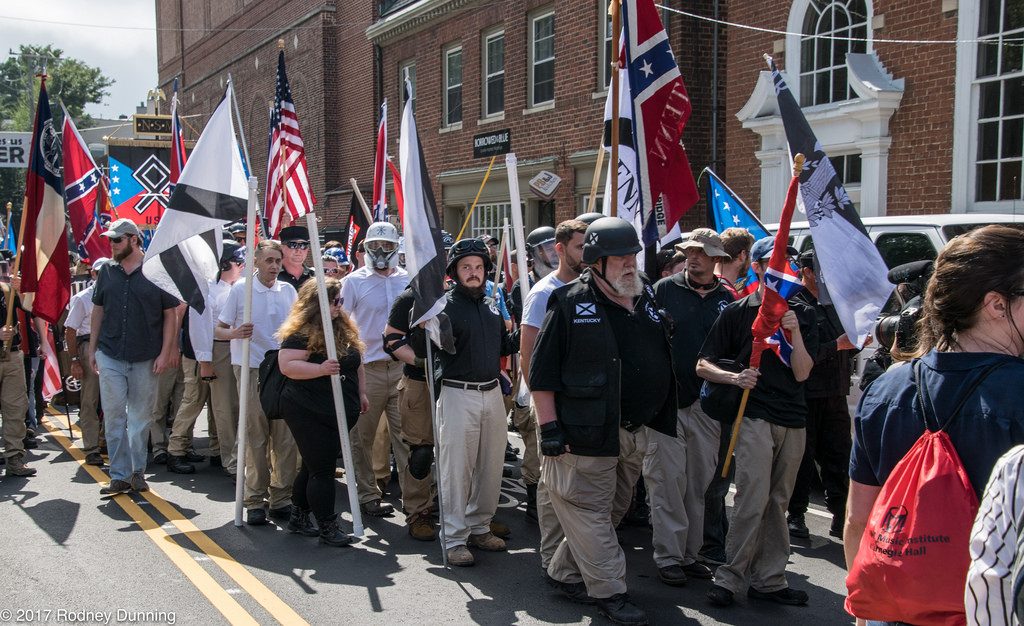 During a rally organised in Charlottesville, Virginia on August 12, 2017 Heather Heyer, a 32 year old white woman, was deliberately run over by a car and killed. The rally, “Unite the Right,” was organized by Jason Kessler of the “Proud Boys,” an ultra-nationalist white supremacy group.  The perpetrator, James Alex Fields, Jr., has been charged with second degree murder.

President Trump quickly condemned the violence ‘on both sides,’ causing a firestorm of media condemnation for treating white supremacists and those protesting against the hate groups as two equal parties having equal blame. It was quickly pointed out that this was in marked contrast to how the President had clearly come out and condemned ‘radical Islamic terrorism’ when the perpetrators were Muslim. Now, when it was a neo-Nazi with Trump sympathies, the violence was blamed on people from both sides, with no mention of terrorism.

It is clear that the stance of President Trump is hypocritical. When a young Muslim man drives a truck into a crowd and kills innocent victims Trump rightly condemns it as terrorism. But when a Neo-Nazi with Trump sympathies does the same, Trump blames ‘both sides’ for the violence and does not even mention the killing.

It is commendable for the mainstream media to point out this double standard, but unfortunately this is a rare instance where this is done. Using different standards for judging your enemies and your friends is the norm among US Presidents rather than the exception, and the only really extraordinary thing about Charlottesville is that this time the press is making an issue out of it.

Noam Chomsky has shown that if you used the standards set up by the US administration to try Nazi war criminals at the end of the Second World War, then every sitting US president after 1945 would have been prosecuted and hanged for war crimes. But who reports on it? Governments consistently condemn the actions and atrocities of their opponents and rivals, real and imagined both, but ignore or whitewash those done by our own countries. In this regard there is little difference between any of the major powers.

Let us look at the concept of terrorism. If we use the common definition of terrorism as the use of force against civilians to threaten and force governments in power to accede to a demand or set of demands, then all major state powers, whether United States, Russia or China, are the greatest terrorists on earth, simply because they have the greatest resources for violence. They routinely use force to pressure other governments to do their bidding.

For example, after 9/11, the Bush Administration informed the Taliban government of Afghanistan that they would bomb their country unless the Taliban handed over Osama bin Laden. This is a text book example of State Sponsored International Terrorism, and fits the above definition like a glove. Yet, nobody would call it terrorism. Yes, 9/11 was an atrocious terrorist act that should be condemned by everybody, but when even more innocent people are killed by greater force, why is there silence?

As for examples of terrorism conducted by China and Russia, the atrocities in Tibet and Chechnya come to mind.

The US routinely supports dictators that are allies, regardless of their crimes. President Suharto killed off more than a million people in Indonesia that he considered communist, all with the blessing and support of the United States. This was not reported on, in the same way as no condemnation is leveled against Saudi Arabia for its discrimination against women and other forms of suppression. After all, these were allies.

Not only do powerful nations gloss over terrorist acts committed by themselves and their allies and justify them with some glib words, but recently the word terrorist is being used to attack opponents that are a thorn in their sides, even if they have nothing to do with traditional terrorism. For example, the little known Animal Enterprise Terrorism Act passed in the United States in 2006 is directed against groups like the Animal Liberation Front and any other group that uses extra-legal means to protect the rights of animals. Any person who causes financial losses to animal research facilities or animal enterprise can now be sentenced to up to 20 years in jail!