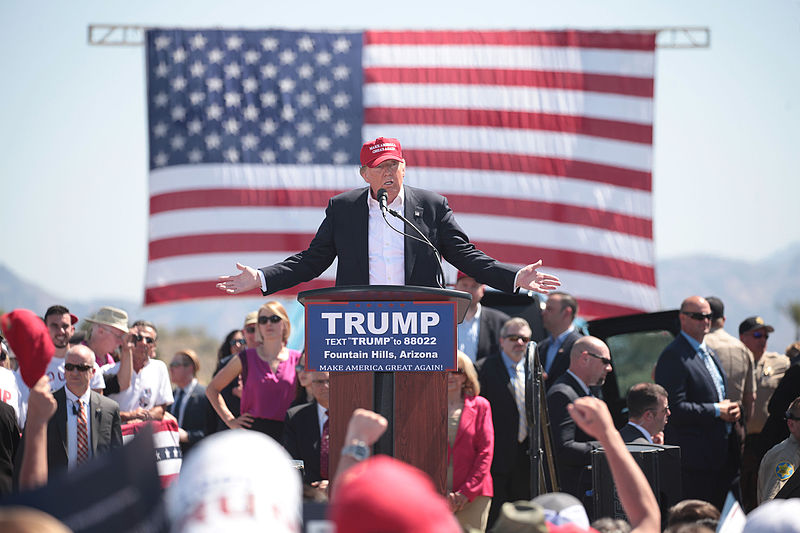 If there is one thing all progressives are united about, it is the universal condemnation of Donald Trump. Rarely has one person managed to create such a united opposition in such a short time.

From a Proutist perspective, we naturally join in the opposition to Trump, as any sane person would do. If we had to choose one of Trump’s policies that stands out as potentially the most disastrous to human civilisation, it would be his stance on global warming. By pulling out of the Paris Accord, and openly denying that global warming is even happening, Trump has accelerated the path towards catastrophic changes in the climate on planet earth.

But it does not stop there. The list of crazy things that Trump stands for is long; the boarder wall against Mexico; the dismantling of Obamacare; the lowering of taxes on rich corporations. The list goes on. Regarding his so called ‘tax reform,’ it is interesting to note that the main beneficiary will be Donald Trump and his rich friends. If these ‘reforms’ becomes law, Trump and his peers stand to gain billions of dollars in lowered taxes. Naturally, he has all reason to pursue this course of action. Rarely has the conflict of interest for a sitting president of the United States been more glaring and obvious.

But then again, there is another side of Trump, and that is where the enigma starts. Trump sometimes actually has some good ideas, and he brings up issues that other established politicians rarely dare to talk about. Take, for example, Trump’s opposition to the Transatlantic Trade and Investment Partnership (TTIP), which he pulled out of. Trump has also threatened to renegotiate the NAFTA agreement, the free trade agreement between the US, Canada and Mexico, and he is attacking other free trade deals negotiated under the auspices of the WTO. Even though these free trade agreements are disastrous for most developing countries, they are considered sacrosanct and all established politicians sing their praise.

Free trade is clearly beneficial to developed nations, but for a struggling developing country, where the local industry is not internationally competitive, it destroys the local industry in a very short time. What is needed instead are fair trade deals, so that developing countries have a chance to gradually develop their industries to a point where they are competitive on the global market.

Naturally, Trump is not concerned with any of this. He is worried about the deals that already exist, those which already favour the United States, but, in his mind, do not favour the United States enough! There is a breath of fresh air in this irony, however. That someone in the establishment finally dares to break the silence and speak out against free trade, might actually embolden more leftist politicians to question these deals from a progressive point of view.

Another area where Trump is breaking with orthodoxy, and not in a bad way, is his willingness to work with Russia. The rhetoric in the United States, and most of the rest of the world, is that Russia is the great demon and the United States is the angel. In reality, they are two of the world’s most powerful nations acting according to their own strategic interests.

Take the issues of Crimea. Crimea was a part of Russia from 1783 to 1954, when it was transferred to Ukraine shortly after the death of Joseph Stalin. However, at that time Ukraine was a part of the Soviet Union, so it was just then a matter of changing the internal administration of a small region within a country, with no expectations of giving up its sovereignty. What makes the Crimea so important to Russia is that it is the base of its Black Sea Fleet, and there is no chance that Russia would allow this base, with all its military ships, to fall into US hands, no more than the US would allow Cuba to become a Russian outpost. The security threat is just too much.

After the West backed a coup against the democratically elected government, and the new government decided to join the EU, Russia had no option but to take Crimea back from Ukraine. The US would definitely have done the same under similar circumstances, so the shock and horror and talk of Russian aggression is just more theatrics.

This ability of Trump to look at the political reality, and see the opponent as just another player which he can deal with, without falling into stereotypes, is a positive trend. Unfortunately, in this case, where Trump could actually do something positive by improving relationships with Russia, Trump’s hands are almost totally tied due to the investigations of his ties with Russia and the accusations that Russia influenced the US elections in favour of Trump.

Finally, another positive initiative of Trump is his decision to invest a trillion dollars to rebuild US infrastructure. Unfortunately, this policy has been reduced to giving tax and other incentives to private companies who are willing to do the investments.

So what do we, as Proutists, take from all this?

Trump is a dangerous president, who has advanced many policies that could be disastrous for the United States, its citizens, and the entire world. Trump’s tax policies promote the benefit of the richest of the rich, without stimulating the wider economy. His failure to sign the Paris Accord threatens to accelerate global warming and possibly the extinction of human civilisation as we know it. And his foreign policy is unpredictable and might unleash major armed conflicts, even a nuclear war.

The present escalating war of words with North Korea pits two personalities that do not know how to back down when challenged. Trump may not have the intention to start a nuclear war, but his lack of diplomatic skills and self-control could very well trigger a nuclear confrontation. When you play brinkmanship, things do not always go as planned.

If we end up with a nuclear war, then nothing else will matter, and everything else will fall into the background. If, on the other hand, war is avoided, another interesting angle can be considered.

By questioning taboo issues, such as free trade, the EU and the US relationship with Russia, Trump has changed the political climate by legitimizing new discussions on these topics. He has thus made it more likely if Proutists raise these questions from a progressive standpoint that the audience will be more willing to listen. And that is not such a bad thing, is it?